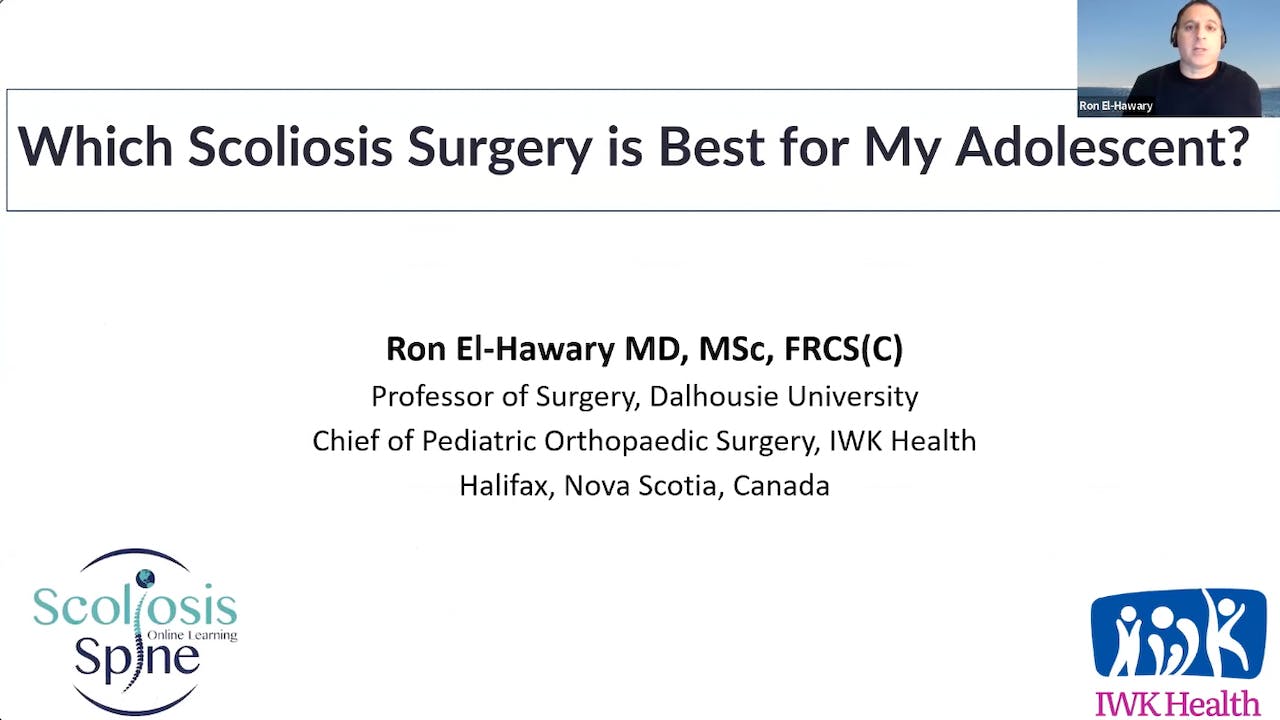 Dr. Ron El-Hawary, MD, MSc, FRCS(C),Professor, Department of Surgery with cross-appointments with the School of Biomedical Engineering and with the Division of Neurosurgery at Dalhousie University in Halifax, Nova Scotia, Canada. He also serves as Associate Chief of Surgery, Chief of Orthopaedics and Director of Scoliosis / Orthopaedic Trauma at IWK Health.
He is currently Past Chair of the Pediatric Spine Study Group, Communications Council Chair of the Scoliosis Research Society, and serves on the Board of Directors of Pediatric Spine Foundation, Scoliosis Research Society, and Canadian Pediatric Orthopaedic Group. He was a recent member of the Board of Directors of Pediatric Orthopedic Society of North America, has been President of the Pediatric Spine Foundation, Chair of the Royal College of Physicians and Surgeons of Canada Orthopaedic Examination Committee, President of the Canadian Pediatric Orthopaedic Group, and was Founding President of the Canadian Pediatric Spine Society. He is co-editor of 3rd edition of The Growing Spine Textbook.
Dr. El-Hawary's education consisted of a Bachelor of Mechanical Engineering (1994), Bachelor of Science in Medicine (1998), and Medical Doctorate (1998) all from Dalhousie University in Halifax, Nova Scotia, Canada. He completed his Residency in Orthopaedic Surgery (2003) and his Master of Science in Medical Biophysics (2004) from the University of Western Ontario in London, Ontario, Canada. He received further education as an Edwards Fellow in Paediatric Orthopaedics and Scoliosis Surgery at the Texas Scottish Rite Hospital for Children in Dallas, Texas (2005). In 2006, he was chosen to be a Scoliosis Research Society Dawson Traveling Fellow and, in 2010, was selected to be a Paediatric Orthopaedic Society of North America European Traveling Fellow. His clinical interests are varied, with the focus being the correction of spinal deformity. This includes the treatment of all forms of scoliosis, including EOS.