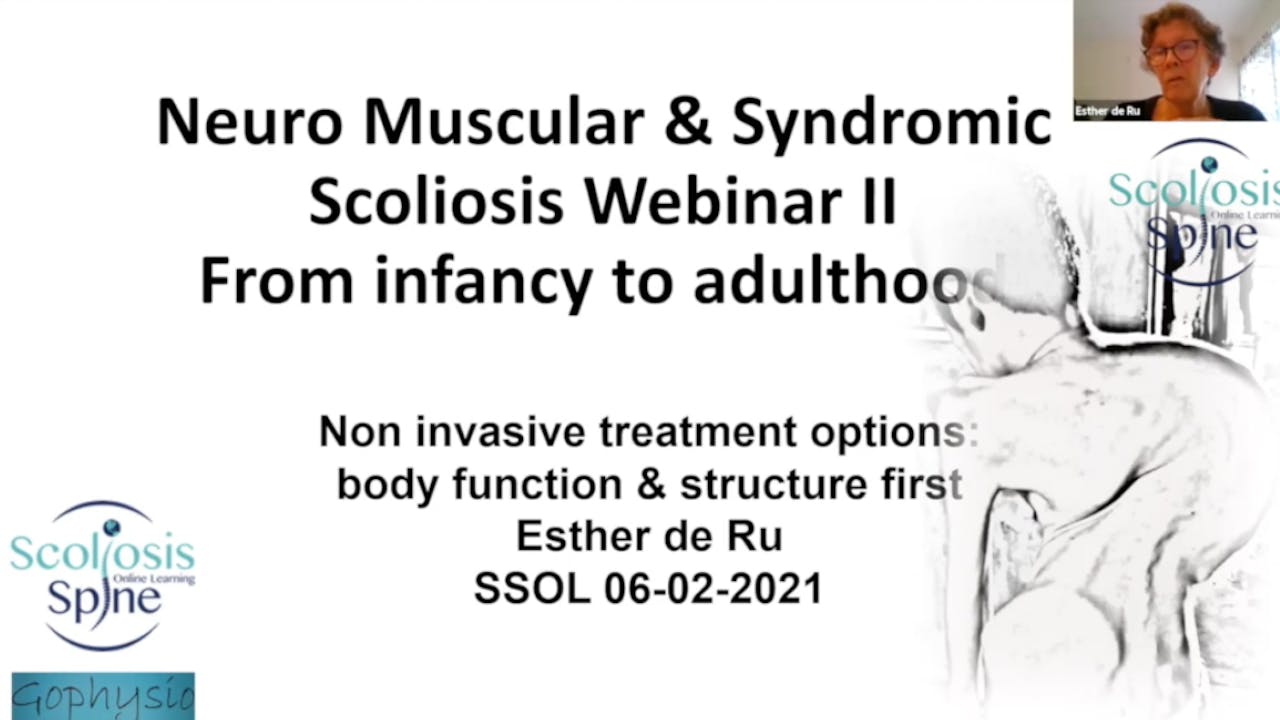 90 min Webinar focus is the conservative therapeutic management of the developing scoliosis in the growing child. Knowledge of the development of the spine and the thoracic cage with age is of importance as sufficient space for the organs to function normally is one of the major therapeutic goals.
Presented are findings from the Scoping Review on non-surgical treatment options and the authors’ experience working with children with various disorders. The age of onset of common neuromuscular and genetic disorders presenting with scoliosis has been documented. Treatment can vary per diagnosis and per symptom (hypotonia trunk, spasticity, dystonia and muscle weakness). A variety of physiotherapy interventions are reviewed. Demonstrated are possibilities to address pain, prevent hip migration, collapsing thorax, pelvic obliquity, and help maintain mobility. Manners to address a number of multisystem symptoms (skin issues, colon dysfunction, breathing difficulties, bone mineralisation deficits) will be discussed. The ‘wait and see’ approach is not recommended and vigilance for signs of further impairment is needed during the entire development from infancy to adulthood.
Esther de Ru is a certified paediatric PT, manual therapist and SEAS scoliosis therapist from the Netherlands. Esther was trained in the Niederhöffer method by Erna Becker ‘Skoliosen und Diskopathiebehandlung’, the Klapp Method described in Das Klappsche Kriechverfahren’ and the French method Rééducation Musculaire à base de Réflexes Posturaux during her PT education. She became an assistant instructor of the adapted version of the Bugnet course in the Netherlands. She further specialized in Early Intervention, Vojta, NDT-Bobath and PNF. During her career of 44+ years she has seen scoliosis patients of all ages. The last 30 years she has treated many children and adults with neuromuscular scoliosis.